Ever since I installed Cumulative update KB5003637, my taskbar is glitchy. The icons are overlapping each other, or sometimes the entire system icons are missing. Also, the search box background color is not correct.

I am seeing this on a corporate device, I am expecting that this is related to the additional toolbar component that was put in during this or a subsequent update. My organization shapes update releases and that function was stripped out of our version of the update. My guess is that messed up some render or order expectation for an update and now I am seeing this artifact.

Try enabling all available tools (MS only) and see if your taskbar items appear. In my case it appears that the icons are actually still visible but pushed to the far right of the render area on the bar. When I enable the extra items it is correctly placed, I see a similar fix when I expand the size of the taskbar forcing the system to redraw but the issue re-occurs if I go back to standard bottom aligned view. Similar effect if I set icon size to large or small, the render is corrected temporarily but reverts. 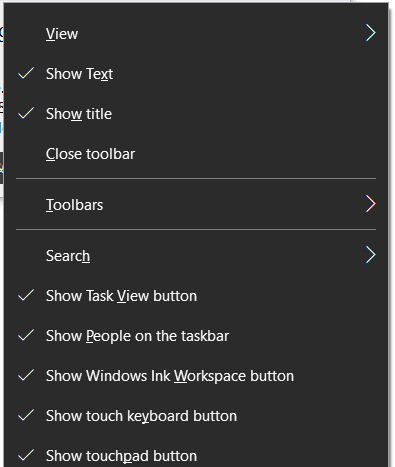 As you can see the News and Interests item is not included in my system even though I have the update installed. (KB5003214 May 28th 2021)

I think this update may not be the root cause but since it’s the next release that is likely where you noticed same as me.

Let me know if you see any similar effects when you try those tricks if I revert to turning them all off I see the issue appear again.

EDIT:  Issue has been resolved with KB5003690 optional cumulative update.

Looks like you are hitting the widely reported Taskbar bug. Currently, the only fix is to uninstall KB5003637, if turning off news and interests hasn’t helped.

You will see this if:

– News and Interests on the taskbar is turned off, and

– Your DPI scaling (Settings|System|Display|Scale and layout is other (larger?) than 100%

Change any one of those, and the problem would go away.