Home > Free Software > Microsoft Office > Fix error: spaces are missing between some words when open a Word 2010 document in Word 2007

Hi all, today i am going to help you fixed the error: spaces are missing between some words when  open a Word 2010 document in Word 2007

spaces are missing between some words in the document

This error caused by the adaption between Word 2007 version and 2010 version. We have only method to fix it:

1- If you want continue save as .docx to To resolve this problem, install the 2007 Microsoft Office Suite Service Pack 3 (SP3). To download the service pack, visit the following Microsoft website: https://www.microsoft.com/en-us/download/details.aspx?displaylang=en&id=27838

2 If you want to fix it when you still using word 2007, please save file as .doc for keep the speces between words.

From microsoft forum fix spaces are missing between some words in the document:

I am a Microsoft employee, I lead the Program Management team for Office Sustaining Engineering.

The issue has already been addressed in a release that first appeared on September 25, 2008. The “non-security fixes” section of the article describes the behavior. The knowledge base article and solution for the problem are located under the link. For Office 2007 users who will receive your documents, ensure they are current on updates for Office. Specifically, ensure the patch referenced in the link above is installed, or ensure the user of 2007 has installed Office 2007 Service Pack 2.

The easiest way to obtain the fix is to install Office 2007 Service Pack 2.

This is an issue related to opening files that we discovered and fixed before the shipment of Office 2010. It was important enough for us to push the fix through the security update channel. At Microsoft we were able to re-produce the problem on machines which did not have the patch installed for Office 2007, and we are unable to reproduce the problem on machines that have the patch installed.

Yesterday we re-tested this problem based on the information being reported in the forums and on various blogs. There are a few details worth noting:

– If you have already saved the document in an unpatched version of Word and the spaces are missing, unfortunately there is no way to recover them.
– When you send the file to other users from Office 2010, unpatched 2007 users who edit the document may cause the spaces to disappear. It is important to ensure Office 2007 users are patched with this update, and ensuring that can be done by turning on Automatic Updates.

Related to the forum post on this topic:
– In our testing, turning spooling services on and off did not affect the problem.
– Additionally, the presence (or not) of a specific printer driver or any printer driver did not solve or cause the problem.

As has been reported on various blogs, the Open XML standard is not the cause of the issue. This is an issue with Word 2007, and we believe a solution has been available since 2008.

We certainly regret any inconvenience this issue may have caused.

If you patch your 2007 installation to the current update level, and you are authoring documents on patched versions of Word 2007 (or 2010), and you still experience this problem, please don’t hesitate to contact us.

This is our team blog: http://blogs.technet.com/b/office_sustained_engineering/.
This is our Twitter stream: http://twitter.com/officeUpdates

You can send feedback or requests for help regarding files that submit this behavior (for patched versions of Word) via the email link on my blog:http://blogs.technet.com/gray_knowlton. We are very interested to know if users are still experiencing this problem after systems are patched.

Change the spacing between characters

Expand or condense the space evenly between all the selected characters

Kern the characters that are above a particular size

Stretch or scale the text horizontally

When you scale the text, you change the shapes of the characters by percentages. You can scale text by stretching it or by compressing it.

To increase or decrease the amount of vertical space between lines of text within a paragraph, the best method is to modify the style the paragraph uses. 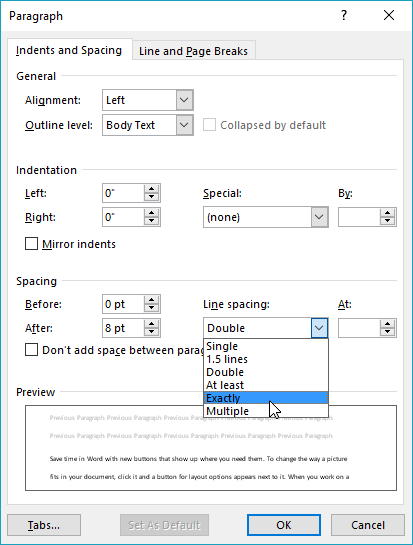