Saigon Street on the first day of Lunar New Year. On the morning of February 12 (on the first day of New Year’s Eve, 2021), Ho Chi Minh City’s street is the most open, some streets are empty. Many people say that this is a special thing about Saigon when Tet comes, the most peaceful day.

Le Duan Street on the morning of the first day of New Year’s Day 2021 was empty
Present at many central routes such as Dien Bien Phu, Nguyen Dinh Chieu (District 3), Nam Ky Khoi Nghia (District 1), Vo Thi Sau (District 1), Dinh Bo Linh (Binh Thanh District) Reporter Thanh Nien noted that the number of people traveling on the road was relatively small, but at noon the number of vehicles increased but not significantly. Most of the roadside shops have been closed, the air is airy and fresh.
Spring travel on the 1st of Tet at Notre Dame Cathedral (District 1), Mr. Nguyen Van Thanh and his wife (67 years old, living in District 1) said that from the early morning, they came here. “Today the street is deserted, just like Tet in previous years. To me, this is a specialty of Saigon that is not always available. Few people should see that Saigon is much more peaceful, the atmosphere is less smoggy, so traveling to spring on this day is reasonable, ”said Thanh. 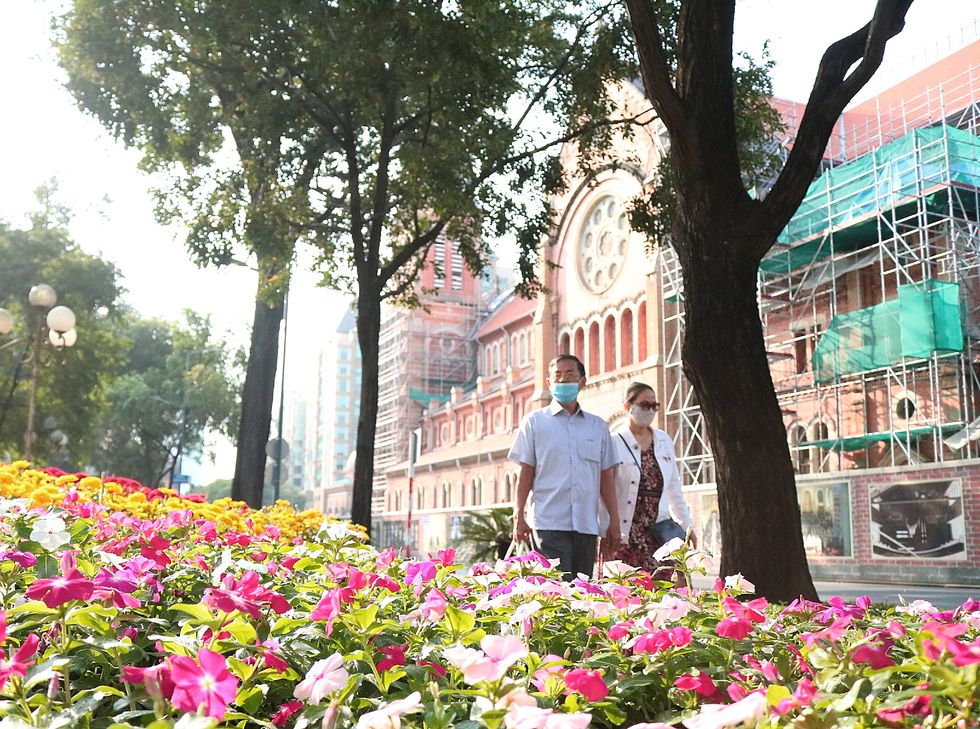 The morning weather was cool, Mr. Van Hoang (24 years old, live Binh Thanh District) chose to exercise in the early days of the new year. He confided that for many reasons, he could not return to his hometown, so he decided to have Tet in Ho Chi Minh City alone. “It is so cool in the morning, so I exercise, this is also a habit, normally the path where I exercise is not crowded, today is even quieter, not a shadow. It feels like the whole road is mine, ”he laughed.
Most of this time, the shops or street vendors are off to sell, the sidewalk is clear. However, there are still some people who still choose to trade at the beginning of the year.
According to the owner of a bakery shop on Dang Thuy Tram Street (Ward 13, Binh Thanh District), this year, because she did not return to her hometown, she still stayed in business with her son. “I work through Tet too, but today I find the road is so deserted so I did not have many customers, I do not know if there are more customers in the afternoon. First day of Tet the store opens, hope for the whole year good luck ”, she said.
Saigon Street on the first day of Lunar New Year
https://theartcult.net/
CHECK OUT MY YOUTUBE CHANNEL https://youtu.be/Rm_PnqW6Jws
Tags: Saigon Streetthe first day of Lunar New Year